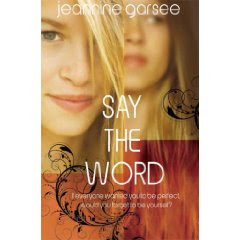 Dredging up the past can knock the present right off balance.

The world expects perfection from seventeen-year-old Shawna Gallagher, and for the most part, that’s what they get. She dates the right boys, gets good grades, and follows her father’s every rule. But when her estranged lesbian mother dies, it’s more than perfect Shawna can take. Suddenly, anger from being abandoned ten years ago is resurfacing along with Shawna’s embarrassment over her mother’s other family. As she confronts family secrets and questions from the past, Shawna realizes there’s a difference between doing the perfect thing and doing the right thing.

Shawna’s honest and relatable voice will draw readers in and hold them until the last page in this coming-of-age story. Jeannine Garsee has delivered a compulsively readable second novel, perfect for fans of Sarah Dessen and Laurie Halse Anderson.

I have very mixed feelings about this book. In some ways, it's wonderful and it deals with a lot of great topics that you don't see too much in the YA genre. However, in other ways, it's just okay and kind of blahhh in some parts. This is going to be a really hard review to write just because of that. . .

The Good:
-->Say the Word dealt with a lot of issues that you don't see too much in YA books, such as: lesbian mothers and step-brothers who may not be step-brothers.
-->It's not sugar-coated. There are many things in this book that didn't seem sugar-coated -- one of them being Shawna's feelings towards her mother and her partner, Fran. This made the book seem realistic.

The Bad:
-->At some points, the events just seemed really rushed. I thought that a few of them could've been spaced out a little better to help this.
-->Shawna's character got annoying to me though the middle of the book. At the beginning, I was sympathetic towards her and her situation, but in the middle and towards the end of the book, Shawna just got on my nerves. She was really focused on herself, it seemed like, and that got on my nerves a lot. However, towards the end of the book, it was like she made a three sixty and her character started to grow on me again.

The Overall:
This book was just okay. I thought it would be a little better than it actually was.

I felt the same, good but also blah.

I read half the book on the computer but it hurt my eyes so I gave up. I really need a copy of this

I might have to pass on this one as well. (I have been saying that a lot today.)

good review! and come back from camping soon!

Thank you for the review, Hope.

Have you read her first book? Its fantastic, my favorite book by far.

What happens in the end??