These are the books I got on Monday through Thursday, since I will not be home Friday or Saturday to see what I got. (: 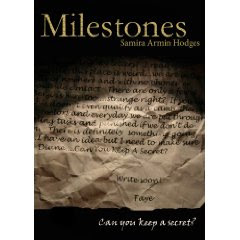 One day. Just one day. That's how long it took for fourteen year-old Faye Martin's ordinary life to take a dramatic and completely unexpected turn. First, she gets struck by lightning a strange and awful experience in itself, but then made worse because Benjamin Parker, the object of her obsession, witnessed her near-death experience. Then she comes home to find her parents are forcing her to leave her friends and hometown of Seattle to attend a summer camp, aptly named Camp Milestone. After several failed attempts to change her parents mind Faye finds herself on a plane headed across the country to a camp she has never heard of.

Only, Camp Milestone is no ordinary camp. There are no phones allowed, shabby cabins and only a handful of campers. The only good turn of events is Benji her longtime crush is among the sparsely populated camp. This highlight of her summer is overshadowed by the camps strange and harsh rules given out by the head of the camp Galiana Moore, who seems crazy most of the time, and who unfortunately has taken a liking to Faye. As if things were not bad enough she notices an odd rash that has consumed most of her back from the lighting strike that seems to not only be growing larger but glowing slightly. Before she knows it, Faye finds herself caught in a whirlwind of uncertainty, torture, calamine lotion and romance....All in the name of summer camp. But as the summer unfolds, she realizes there is much more to Camp Milestone than meets the eye. Will she be able to unravel the mystery that surrounds this unusual camp? And more importantly, will she be able to survive the madness long enough to put the pieces together?

Milestones is a delightful story about the true meaning of self-discovery, love and friendship, book one of the Milestones trilogy takes readers into an imaginative and amazing new world which gives a whole new meaning to summer vacation.

Milestones is the debut young adult novel for Samira Armin Hodges a fresh and exciting new voice in the literary world. 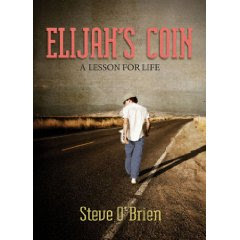 Steve O'Brien has crafted a new work of fiction that successfully negotiates the tricky balance between entertainment and instruction. Overtly didactic in some ways, Elijah's Coin is also a highly suspenseful story that introduces us to characters we come to care about. The content is edifying and thought-provoking, but the story never becomes dry.

Elijah's Coin is the story of Tom, a young man who has suffered a tragic loss and is spiraling out of control. He's angry, anti-social, and rapidly descending into a life of crime. Then, during a night of folly, as he brazenly commits burglary, Tom encounters the night watchman Elijah King, a mysterious figure with a shrouded past. Elijah, unexpectedly, doesn't turn Tom in but instead becomes a stern and rather cryptic mentor to him. Rather than laying his lessons out in a straightforward manner, Elijah gives Tom an enigmatic coin and sends him on a mission of self-discovery.


Both are for review.

If I get any more on Friday or Saturday, I will add them to next week's In My Mailbox, when the vlog will be back. (:

To be honest Hope, I don't really know what I think of your haul this week. They sound like they would be an interesting read but I am unsure as to what they might be like. I love it, a mystery read.

Milestones sounds pretty intriguing. I'll be looking forward to hearing your thoughts on it.

Elijah's Coin sounds like it would be interesting to some of my reluctant boy readers. Look forward to your review.

Milestones does look good. And yay for Vlog!

great books! Hope you are having tons of fun camping! can't wait for you to get back.