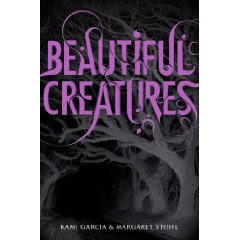 There were no surprises in Gatlin County.

We were pretty much the epicenter of the middle of nowhere.

At least, that's what I thought.

Turns out, I couldn't have been more wrong.

There was a curse.

There was a girl.

And in the end, there was a grave.

Lena Duchannes is unlike anyone the small Southern town of Gatlin has ever seen, and she's struggling to conceal her power and a curse that has haunted her family for generations. But even within the overgrown gardens, murky swamps and crumbling graveyards of the forgotten South, a secret cannot stay hidden forever.Ethan Wate, who has been counting the months until he can escape from Gatlin, is haunted by dreams of a beautiful girl he has never met. When Lena moves into the town's oldest and most infamous plantation, Ethan is inexplicably drawn to her and determined to uncover the connection between them.

In a town with no surprises, one secret could change everything.

I really don't know where to start other than by telling you that Beautiful Creatures was wonderful and you should go buy it now. I wish that's all I could put in this review: It was wonderful. Go buy now.

But this wouldn't be a good review if I didn't explain to you why this book is so good. Well, for starters, the storyline is very original. Garcia and Stohl did a wonderful, wonderful job of making this a very original story. If this sounds like another book to you when you read the summary, it really isn't.

The voice in this book was wonderful, also. Usually when you have a book that has two authors, each author takes one character and writes from their point of view. However, this wasn't the case with Garcia and Stohl, which really surprised me. The whole book was from Ethan's point of view, and both authors wrote from his point of view. It was basically flawless. If the cover hadn't shown two authors, I would never have realized that this was a book written by two people.

The characters in this book were really good too. Every single character in this book was very developed. It was also very easy to relate to every one of them, no matter how different they seem from you.

Overall, Beautiful Creatures is just a wonderful book that I really think everyone should try to read, even if it may not look like you'll like it. Don't be intimidated by its size -- it may look big, but once you start reading the pages just fly by until you're finally on the last chapter and you're trying to figure out how you got to that last page so fast. Then you just want to re read it again. :)

Beautiful Creatures is definitely one of the best, if not the best, book that I've read in 2009 so far.

Picture from amazon.com. This book was received from the publishing company Little, Brown for review.
Posted by Anna at 10:19 AM

I just bought this one! Now I'm definitely putting it at the top of my TBR list!!

Totally excited to read this one! Cover Story on it coming soon!

I read this book in one go.. Great review..

This was a very good book! I was so addicted to it I had to force myself to put it down and do homework! It is SOOOOOO GOOD!!! And the ending is one that leaves you wondering. I've heard there is going to be more books though. i wonder if it will be about them, or someone different but the same types of magic...