Love You Hate You Miss You - Elizabeth Scott 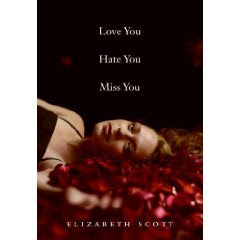 Get this, I'm supposed to be starting a journal about "my journey." Please. I can see it now: Dear Diary, As I'm set adrift on this crazy sea called "life" . . . I don't think so.

It's been seventy-five days. Amy's sick of her parents suddenly taking an interest in her.

And she's really sick of people asking her about Julia. Julia's gone now, and she doesn't want to talk about it. They wouldn't get it, anyway. They wouldn't understand what it feels like to have your best friend ripped away from you.

They wouldn't understand what it feels like to know it's your fault.

Amy's shrink thinks it would help to start a diary. Instead, Amy starts writing letters to Julia.

But as she writes letter after letter, she begins to realize that the past wasn't as perfect as she thought it was—and the present deserves a chance too.

Plot: The plot of this was very good. In Scott's other novels, there's the reoccurring theme of family issues, finding yourself, romance, or a mix of the three. In this book, you basically see all three of those themes, and while you might think it will make the plot busy, it doesn't. It makes it a wonderful novel that keeps you hanging until the end, even though sometimes you just want to band your head on a wall and scream at the book (for good reasons, of course.)

Characters: Amy was a really well developed character. Scott really thought out the process of what it would be like if your best friend died in a car accident, and you didn't. However, I wish you found out a little more about the background characters, like Julia's mother or Patrick. Those two don't play major roles in the story, but I wish they were more developed and that we knew more about them as the story was going on.

Wow Factor: I was very wowed with this book, as I was with most of Scott's other novels. This is one that will have you happy, sad, and a little bit of all emotions. You will walk away thinking about this book and the ending and the characters. All in all, this review probably sounded really fangirly, but I am a big fan of Scott's work, and she is one of my favorite authors. If you haven't read anything by her yet, please do.

I have this on my bedside table. I started it over 2 weeks ago and haven't had a chance to pick it up again. Glad to hear Ms. Scott delivers again!

this does look good!

Can't wait for this one!

Nice review! I'm looking forward to reading this one!