Review: Me, Him, Them, and It by Caela Carter 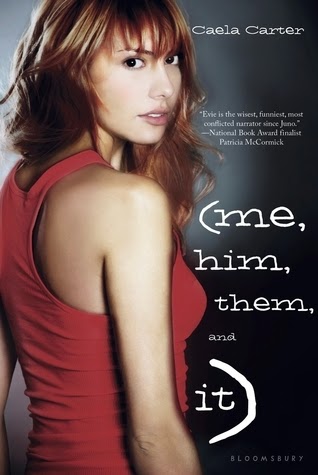 
ME is Evelyn Jones, 16, a valedictorian hopeful who's been playing bad girl to piss off THEM, her cold, distant parents. HIM is Todd, Evelyn's secret un-boyfriend, who she thought she was just using for sex - until she accidentally fell in love with him. But before Evelyn gets a chance to tell Todd how she feels, something much more important comes up. IT. IT is a fetus. Evelyn is pregnant - and when Todd turns his back on her, Evelyn has no idea who to turn to. Can a cheating father, a stiff, cold mother, a pissed-off BFF, and a (thankfully!) loving aunt with adopted girls of her own help Evelyn make the heart-wrenching decisions that follow?

This book had a very interesting premise to it. It dealt with teenage pregnancy, which is something that seems to be more popular in YA books right now. However, where Carter is different from other books, is the fact that for most of the book, the main character deals with whether or not she should go get an abortion behind her parent's backs.

I feel like the topic of abortion is one of those taboo topics in YA books, and just really is not discussed. However, Carter does it very tastefully. She also is very tasteful in dealing with the topic of how the baby's father is acting and what he is thinking, etc.

This book would have been ten times better if the characters were written better. The main character was hard to connect with, and that makes it hard to read a book. However, even with this minor issue, you do see growth among all of the characters in this book as it goes on, which is why I did not mark down the character section even more in The Short Version.

The writing was okay. At some points, I thought the writing could have been a little better to get the point across. There were times where I felt like I did not understand what was happening in a scene.

Overall, this book has some minor issues, but it is by no means horrible. It is a very good book about a taboo topic in YA literature.

This is a great review, Anna! Short, to the point, and clear. I've never heard of this book until now, but you conveyed the overall feel and idea of it very well. I'm currently attempting a book myself right now, so I can't talk too much when it comes to character development LOL. Not an easy thing..

Hey, if you get a few minutes of spare time, I'd love to hear your honest thoughts on my own writing. I've only gotten four chapters published of my book, but would you be interested in critiquing what I've done so far?

Link if you'd like to check it out: Edge of Night: "Renegade"