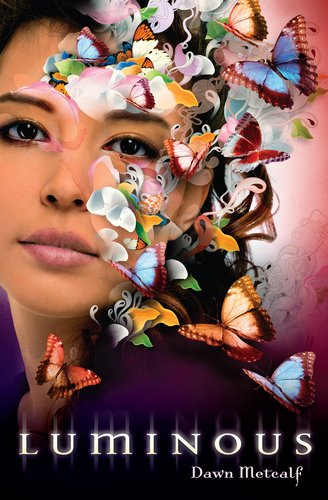 As reality slips and time stands still, Consuela finds herself thrust into the world of the Flow. Removed from all she loves into this shifting world overlapping our own, Consuela quickly discovers she has the power to step out of her earthly skin and cloak herself in new ones-skins made from the world around her, crafted from water, fire, air. She is joined by other teens with extraordinary abilities, bound together to safeguard a world they can affect, but where they no longer belong.

When murder threatens to undo the Flow, the Watcher charges Consuela and elusive, attractive V to stop the killer. But the psychopath who threatens her new world may also hold the only key to Consuela's way home.

Luminous was definitely a... different read.  There were a few things that I found were well done with the novel... however, there were also many things that made this novel just okay.

Dawn Metcalf has beautiful writing.  It is very rhythmic and poetic like.  It reminded me of poetry, just in prose form.  It really was one of a kind, and I did enjoy that part of the novel.

I also felt as if the story could have been described better.  With Metcalf creating her own world for this story, it really needs to be described and be described well so readers can understand it.  I felt as if it was not, and the idea of the Flow sometimes left me confused.  There were also some scenes that I felt were not described very well that also left me confused and having to go back and re-read over and over to understand.

I also felt as if the pacing was a little slow.  I didn't feel as if the story got moving until the last hundred pages, which I did find that I enjoyed.

Even though this review makes it sound like I am bashing the novel, I did enjoy the idea of it.  If I could have connected with the characters more, this novel would have been astounding.  There is a lot of promise for Dawn Metcalf as an author.  She is very creative and comes up with interesting ideas.

Promising premise and idea, just not described well and hard to connect with characters.

This review makes me sad. I had high hopes for LUMINOUS.