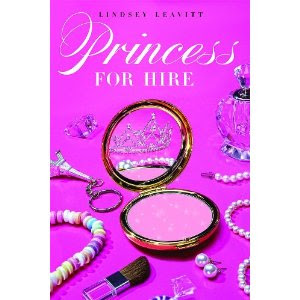 
When an immaculately dressed woman steps out of an iridescent bubble and asks you if you'd like to become a substitute princess, do you
a) run
b) faint
c) say Yes!
For Desi Bascomb, who's been longing for a bit of glamour in her Idaho life, the choice is a definite C--that is, once she can stop pinching herself.  As her new agent Meredith explains, Desi has a rare magical ability: when she applies the ancient Egyptian formula "Royal Rouge," she can transform temporarily into the exact lookalike of any princess who needs her subbing services. Dream come true, right?
Well, Desi soon discovers that subbing involves a lot more than wearing a tiara and waving at cameras. Like, what do you do when a bullying older sister puts you on a heinous crash diet? Or when the tribal villagers gather to watch you perform a ceremonial dance you don't know? Or when a princess's conflicted sweetheart shows up to break things off--and you know she would want you to change his mind?
In this hilarious, winning debut, one girl's dream of glamour transforms into something bigger: the desire to make a positive impact. And an impact Desi makes, one royal fiasco at a time.


Princess for Hire was a very nice, original book.  It's a very fast read, and once you get into the story, it'll be very hard to put it down.  Leavitt creates a book with a main character who isn't too cliched, which is very nice.


Desi was a very normal teenager.  She's a character that many teenagers will be able to relate to.  And while Desi is a younger teenager, and this is more of a pre-teen book, I still loved it.


If you're the kind of girl who always wanted to be a princess, this is a great book for you to read.  Desi is basically in that whole situation.  I looved reading about the sticky situations Desi got into.  They were so original, and even sometimes funny.  I found myself laughing so many times.


Overall, Leavitt has created a very original book with Princess for Hire.  I would recommend it especially to younger teens, though I think anyone could read it. :]

Hey Hope - one of my student's just reviewed this book as well. She loved it! Haven't read it yet, but I plan on soon!