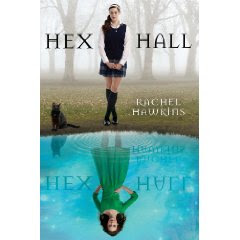 I'm starting over at one for the new year! (: Today's pick is Hex Hall by Rachel Hawkins.

Three years ago, Sophie Mercer discovered that she was a witch. It's gotten her into a few scrapes. Her non-gifted mother has been as supportive as possible, consulting Sophie's estranged father--an elusive European warlock--only when necessary. But when Sophie attracts too much human attention for a prom-night spell gone horribly wrong, it's her dad who decides her punishment: exile to Hex Hall, an isolated reform school for wayward Prodigium, a.k.a. witches, faeries, and shapeshifters.

By the end of her first day among fellow freak-teens, Sophie has quite a scorecard: three powerful enemies who look like supermodels, a futile crush on a gorgeous warlock, a creepy tagalong ghost, and a new roommate who happens to be the most hated person and only vampire on campus. Worse, Sophie soon learns that a mysterious predator has been attacking students, and her only friend is the number-one suspect.

As a series of blood-curdling mysteries starts to converge, Sophie prepares for the biggest threat of all: an ancient secret society determined to destroy all Prodigium, especially her.

This one just looks so different (a good different) and really, really good. I want my hands on it NOW. It's released on March 12th.

This looks like such a good book and I love the US cover just as much as the UK one. Cant wait to read it too

Lovely cover and a very intriguing summary. I would love to read this book

I absolutely love that cover, it just pops! Nice pick :)

I am so excited for this book. I hve heard nothing, but good things about it. This will be one that I am sure I will by the first day it's out! Good choice!

Oh my gosh, thank you so much for this review! This book sounds great, now on my TBR list!