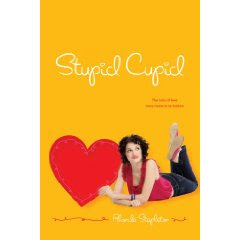 Armed with a hot pink, tricked-out PDA infused with the latest in cupid magic (love arrows shot through email), Felicity works to meet her quota of successful matches. But when she bends the rules of cupidity by matching her best friend Maya with three different boys at once, disaster strikes. Felicity needs to come up with a plan to set it all right, pronto, before she gets fired?and before Maya ends up with her heart split in three.

Before I start this review, I would like to say that Stupid Cupid is more like a Simon Romantic Comedy than just a regular Simon Pulse book. I went into it thinking that it might be a little bit serious, and a little less predictable, than a regular Simon Rom-Com, but that was not the case.

Now, onto some good things. The premise of the story was very good. As far as I know, there aren't any young adult books about cupids. The premise was really the best thing about the book, in my opinion. Also, as many of you know, I'm a sucker for cute endings, like the endings in Simon Rom-Coms. Now, I'm not going to give the ending away, but let's just say I liked it. (:

Overall, Stupid Cupid was a good debut novel. I look forward to reading the next book in the trilogy. I hope that Stapleton works on the writing and making the characters more developed... that would make me enjoy the books much more. I think, besides it's flaws, Stupid Cupid is still a good book to read -- it's just more of a check out from the library book, and not a go buy from the bookstore book.

Nice review. I really do want to read this. It's a nice idea for a book...cupids. Reminds me of that show that used to be on (maybe it go canceled? Idk...I hope not).