Review: Give Up the Ghost by Megan Crewe

Hey everyone! Sorry about the lack of posts lately - today was the end of the second week of school and I THINK I'm finally on a schedule. Hopefully I'm on a schedule, anyway. xD

First, I promised y'all a picture of the car that my grandpa gave me, like, ages ago, so here's one! The guy in the picture is my Papa who gave me the car. =) 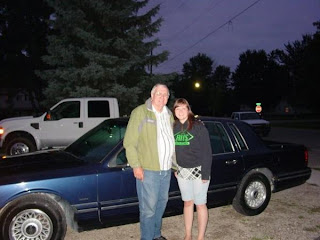 Now onto the review!

Cass McKenna much prefers ghosts over “breathers.” Ghosts are uncomplicated and dependable, and they know the dirt on everybody…and Cass loves dirt. She’s on a mission to expose the dirty secrets of the poseurs in her school.

But when the vice president of the student council discovers her secret, Cass’s whole scheme hangs in the balance. Tim wants her to help him contact his recently deceased mother, and Cass reluctantly agrees.

As Cass becomes increasingly entwined in Tim’s life, she’s surprised to realize he’s not so bad—and he needs help more desperately than anyone else suspects. Maybe it’s time to give the living another chance….

How many other debut books are there this year that are amazing?! Seriously, I loved this book. It took me a while to realize that it might be a little bit more serious than I was anticipating, I really enjoyed it. It deals a lot more with death and dying than I would've thought of from reading the summary, even though it is about ghosts.

The characters were amazing... I really liked Cass. I felt like I had something in common with most of the characters, even if we seemed like we were nothing alike.

There was really just one main thing I would change about Give Up the Ghost: I'd like more of a back story on how Cass got her ability. The book gives a basic explanation, but I think a little bit more explanation about it would've been wonderful.

I recommend this book to everyone, even if you think ghosts may not be your thing. Four and a half hearts out of five. =)

Nice review, I can't wait to read this book(:

I NEED this! I've read countless rave reviews on it and think it sounds like such a good read. Awesome review!

This book is totally on my TBR list, I just wish it was on the Kindle!