In My Mailbox (September 13)

I only got two books these week, both for review. 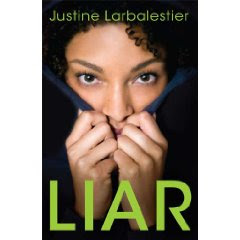 Micah will freely admit that she’s a compulsive liar, but that may be the one honest thing she’ll ever tell you. Over the years she’s duped her classmates, her teachers, and even her parents, and she’s always managed to stay one step ahead of her lies. That is, until her boyfriend dies under brutal circumstances and her dishonesty begins to catch up with her. But is it possible to tell the truth when lying comes as naturally as breathing? Taking readers deep into the psyche of a young woman who will say just about anything to convince them—and herself—that she’s finally come clean, Liar is a bone-chilling thriller that will have readers see-sawing between truths and lies right up to the end. Honestly.

As the youngest and only female member of the Knights Templar, Bilquis SanGreal grew up knowing she wasn't normal. Instead of hanging out at the mall or going on dates, she spends her time training as a soldier in her order's ancient battle against the Unholy.

Billi's cloistered life is blasted apart when her childhood friend, Kay, returns from Jerusalem, gorgeous and with a dangerous chip on his shoulder. He's ready to reclaim his place in Billi's life, but she's met someone new: amber-eyed Michael, who seems to understand her like no one else, effortlessly claiming a stake in her heart.

But the Templars are called to duty before Billi can enjoy the pleasant new twist to her life. One of the order's ancient enemies has resurfaced, searching for a treasure that the Templars have protected for hundreds of years -- a cursed mirror powerful enough to kill all of London's firstborn. To save her city from catastrophe, Billi will have to put her heart aside and make sacrifices greater than any of the Templars could have imagined.

Great set of books.
Liar and Devils Kiss both look really good!
Hope you enjoy them.
Am eager to see your thoughts on them. :)

I really want to read Liar. It sounds so good. Happy reading!