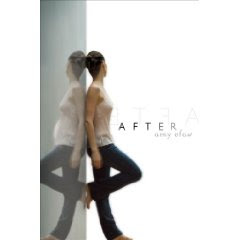 An infant left in the trash to die. A teenage mother who never knew she was pregnant . . .
Before That Morning, these were the words most often used to describe straight-A student and star soccer player Devon Davenport: responsible, hardworking, mature. But all that changes when the police find Devon home sick from school as they investigate the case of an abandoned baby. Soon the connection is made—Devon has just given birth; the baby in the trash is hers. After That Morning, there’s only one way to define Devon: attempted murderer.

And yet gifted author Amy Efaw does the impossible— she turns Devon into an empathetic character, a girl who was in such deep denial that she refused to believe she was pregnant. Through airtight writing and fast-paced, gripping storytelling, Ms. Efaw takes the reader on Devon’s unforgettable journey toward clarity, acceptance, and redemption.

After is a wonderfully written book. It's written in third person, which I don't usually liked, but it fits this book PERFECTLY so I didn't mind. You can tell that Efaw put lots of time and research into her writing. Everything seemed nice and precise and the best way that it could be written. You an tell that Efaw did lots of research, not just because of the topic of the book, but because how how the book is written.

I think that After is a wonderful contribution to the young adult book market, and if you haven't read it yet, I strongly suggest it. It's a wonderful book, I really enjoyed it, and it deals with a wonderful topic. The only complaint I had about it was the ending. The ending was so sudden, and i really would've liked to find out what happened next in Devon's story.

Five out of five hearts.

I really want to read this, it looks amazing. Awesome review(:

This sounds like a great book and I can't wait to read. Loved your review.

I emailed my address to you again. Please double check to make sure it didn't go in your spam mail. Thanks.

I love this one really much. It's such a strong read regardless how the ending doesn't seem to be very satisfying.

I've heard so many good things about this. About how its such a good and thought provoking topic. Making you sit in someone's shoes that you would normally put down or think horribly about.

Sounds like an awesome book. I'm going to have to check it out now! I like your blog as well. Come stop by mine!

I'm pretty excited about this one, so I'm glad to hear you enjoyed it. Thanks for the review.

It's a wonderful and awesome review i am waiting for the book..
Carol
You cannot go wrong on the best security systems

I want to read this so badly, I've heard it's amazing. :)


It looks like we have some similar book interests so I'm now following your blog :]

Feel free to vist mine also:

I'm kind of new to this so any suggestions are welcome!

Oh & be sure to enter the contest I'm running!

I am getting there with it! So far its pretty good!
Love your review!