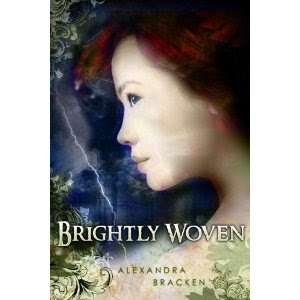 When Wayland North brings rain to a region that's been dry for over ten years, he's promised anything he'd like as a reward. He chooses the village elder's daughter, sixteen-year-old Sydelle Mirabel, who is a skilled weaver and has an unusual knack for repairing his magical cloaks. Though Sydelle has dreamt of escaping her home, she's hurt that her parents relinquish her so freely and finds herself awed and afraid of the slightly ragtag wizard who is unlike any of the men of magic in the tales she's heard. Still, she is drawn to this mysterious man who is fiercely protective of her and so reluctant to share his own past.


The pair rushes toward the capital, intent to stop an imminent war, pursued by Reuel Dorwan (a dark wizard who has taken a keen interest in Sydelle) and plagued by unusually wild weather. But the sudden earthquakes and freak snowstorms may not be a coincidence. As Sydelle discovers North's dark secret and the reason for his interest in her and learns to master her own mysterious power, it becomes increasingly clear that the fate of the kingdom rests in her fingertips. She will either be a savior, weaving together the frayed bonds between Saldorra and Auster, or the disastrous force that destroys both kingdoms forever.

I have fallen in love with this book.  By the time it was over, I was thinking, "Noooo!  I need more Sydelle and North!  It cannot be over!"  There have been so many fantasy type books written lately, that when I see another one, I start wishing and hoping that when I read it, it brings something different to the table that I haven't read before in a fantasy novel.  Brightly Woven did that.

It takes a totally different spin on wizards and humans and magical abilities.  Bracken creates a whole new world that you just get sucked into.  When you're reading this novel, you can feel the emotions, you can see the land, you just know what these people's lives are like - which is odd, becase the whole world in this novel is different than ours.

The characters in this novel were outstanding.  By the end of the book, you could definitely see the change that they had and that they grew, and I love seeing that in books. =)

This is definitely a wonderful novel.  I'm recommending it to everyone to read because it's just that good.

This book is being reviewed as a part of 1 ARC Tours.  I was in no way, shape, or form paid for writing this review.
Posted by Anna at 2:34 PM

I am looking forward to reading this novel. Glad you liked it :D

I really want to read this book, especially after reading your review. And I love the cover, defiantly adding this to my wishlist!

I am new to your blog, but wanted to say that I am enjoying reading your reviews. This book sounds great. I like books about magic and wizards.