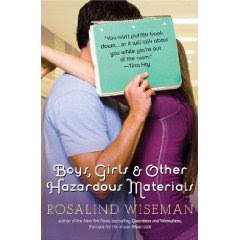 Looking for a new beginning after a terrible mean girl past, Charlie Healey realizes there’s no escaping high school drama.
Charlie Healey thinks Harmony Falls is the beginning of a whole new life. Middle school was brutal. But high school is Charlie’s big chance to start over and stay out of drama, except that on her first day she runs into Will, her ex–best friend, who had moved away. Now a varsity athlete and hotter than Charlie remembered, Will hangs with the crowd running the school. But Charlie doesn’t understand their power until an innocent delivery guy falls victim to a near-deadly hazing prank.

Torn between doing what’s right and her secret feelings for Will, Charlie must decide whether to turn in her very best friend or live with the guilt of knowing what he did.

Rosalind Wiseman’s first novel for young adults is a fresh, funny, and juicy read about friendship, betrayal, and how far some will go to be accepted.

Let me start by saying that I loved this book! Wiseman definitely created a novel that can appeal to many teenagers - even if they aren't freshman. I can see where this novel would be a great read for a freshman - boy or girl, however. However, I'm a junior, and I still loved and could relate to this book. It actually brought back a lot of memories from my freshman year... especially on Charlie's first day of school. I can still think back and remember how nervous I was on that particular day in my schooling.

There were three areas I marked this book down on however: originality, cover, and ending. I marked Boys, Girls, and Hazardous Materials for originality for one reason. Though the book was original, I still think it could've been made a little different to make it even MORE original. There were some cliches in this novel that just really annoyed me that I thought could've been made less... cliche-y.

The ending was... cute. However, I wanted to know more about Charlie and Will! You can't just have that major event happen and then end the book like that! That made me sad... I really loved both Charlie and Will's characters and I was disappointed that the book had a really quick ending like that.

As far as the cover: I like the one they chose as the final, but I do like the ARC cover better. It was so cute with the bomb on it! haha:)

But don't let this not make you read the book: all of these things were really minor things... it's hard to find things to really critique this book on because there's no real big things to critique it on. I thought this book was wonderful and I think everyone who reads it - teen or adult - can relate to.

This sounds really cute. It kind of reminds me of Sweethearts by Sara Zarr. I'll have to check this out. Thanks for the great review!

Nice review.. I surely plan to read this one.